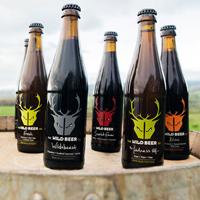 As of January 1st 2017, Cave Direct will be directly distributing Somerset’s incredible Wild Beer Brewing Company throughout the UK.

It’s been another amazing year in British beer, with the number of breweries rising to over 1,700 and the quality skyrocketing. Wild Beer have been at the heart of the craft revolution for many years, producing the country’s best wood-aged sour beers as well as a host of saisons, fruit ferments and hoppy beers.

They join Lost and Grounded and Gipsy Hill in Cave’s selection of new British breweries in 2016. As Belgian importers we’ve always loved Wild Beer and their sour beers. Right from the start with beers like Modus Operandi they have been making fantastic farmhouse and lambic-inspired brews, so we’re delighted to have them on board to show new parts of the UK what they’re capable of.

The brewery will launch in London in January, with a big tap takeover yet to be announced. We are already taking some exciting and unusual kegs onto the specials list, and their core and special ranges will be available from all Cave Direct hubs in Manchester, Bristol and London.