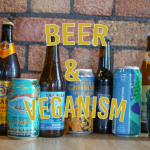 In recent years, veganism has become a trend that food and beverage companies cannot afford to ignore. Beyond the idea of inclusivity, it's a great business opportunity for most breweries. Unfortunately, we have realised that there are still a lot of misconceptions around beer and veganism. This guide is here to give you some pointers on how to approach this question with a customer.

The confusion comes from the ingredients used in the fining process. Traditionally, pub customers have liked their beers clear and uncloudy. To do this brewers had to eliminate the residual yeast remaining after fermentation. Isinglass, also known as fish bladder, was the fining agent used to make beer clear and translucent. However, its use also made the beer unsuitable for vegetarians and vegans. Further difficulties came from loose labelling laws which did not make the listing of fining agents mandatory creating this urban legend that beer as a whole isn't suitable for vegans. Although isinglass seemed to be a great fining agent - its unsuitability for the vegan & vegetarian audience became a problem and brewers stopped using it. Good news – Most of the beers that we stock are now vegan friendly! Moreover, most craft breweries have understood the importance of appealing to the vegan audience and make sure every product is clearly labelled as vegan-friendly.

But although isinglass has slowly been faded out we have seen the increase of honey, milk (lactose sugar) and even bacon being used in some beers after all who doesn’t love bacon in a big imperial stout! But rest assured on every product page of the website we have noted whether it contains gluten and is vegan friendly so no confusion there.

If you want to set your customers at ease, you can show them the website Barnivore.com - it's a digital tool that helps assess if a beer is suitable for vegans or not.

All these beers are Vegan friendly (and delicious!)