Oktoberfest: the pinnacle of beer 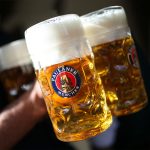 Bucket list events. There are hundreds you could name. Carnival in Rio, Mardi Gras in New Orleans, Cannes Film Festival, Glastonbury…the list goes on. After a 3 year hiatus due to the pandemic, Munich’s Oktoberfest was back, and for me, I was going to tick off the ultimate beer drinker’s bucket list event. I’ve had a career in beer and hospitality for 15 years, it’s pretty much all I’ve done. So, it’s safe to say that this pilgrimage was long overdue.

It was an early start to the trip, tip-toeing out of the house around 3 am being careful not to wake my wife and kids – I took a moment to remind myself that the early morning would be worth it, there’ll be plenty of time to have a quick power nap on the flight. I met up at Manchester Airport with colleagues and a couple of lucky customers who were joining us for the trip. It was time for breakfast and an airport pint, everyone knows the rules. 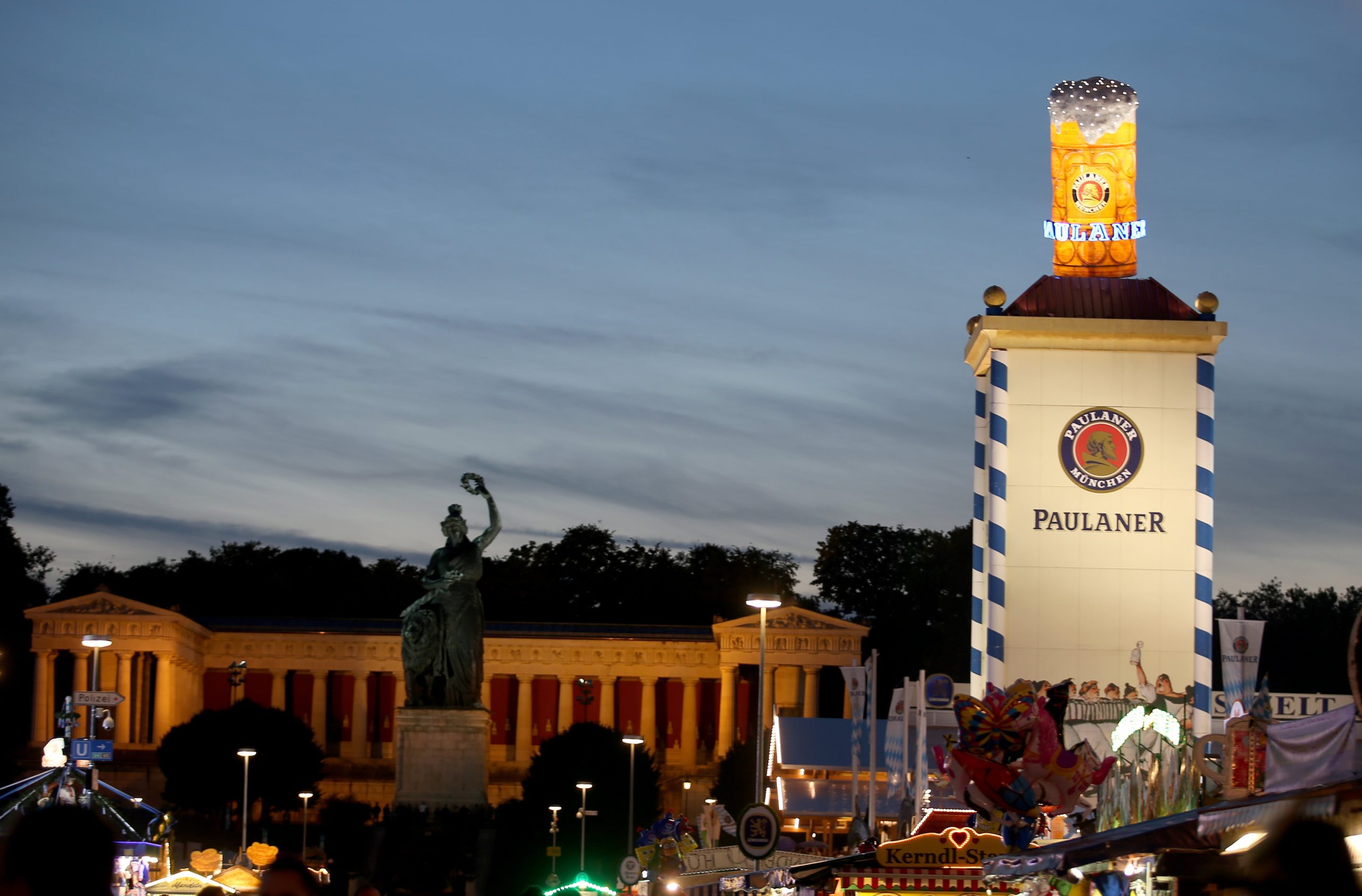 In the airport, we bumped into some of the team from Albert’s Schloss who were also making the same trip. Looking around the terminal building it was clear to spot others embarking on their own beer pilgrimage, picking out the occasional Lederhosen or Bavarian hats amongst the crowds. It was a sight we saw more and more along our journey. I’d say 40-50% of our flights were heading to Oktoberfest, by the time we reached immigration in Munich the hats and Lederhosen were in the majority. People travelled from all over the world to Munich for the biggest event of the year. Sights like this make you realise the size and scale of this event.

In case you were wondering, just how big is Oktoberfest? Well, in 2019 approximately 7m people attended Oktoberfest, and consumed 7m litres of beer…that’s the equivalent of 12 steins every second for the duration of the festival! It seems impossible to comprehend the scale of this place. 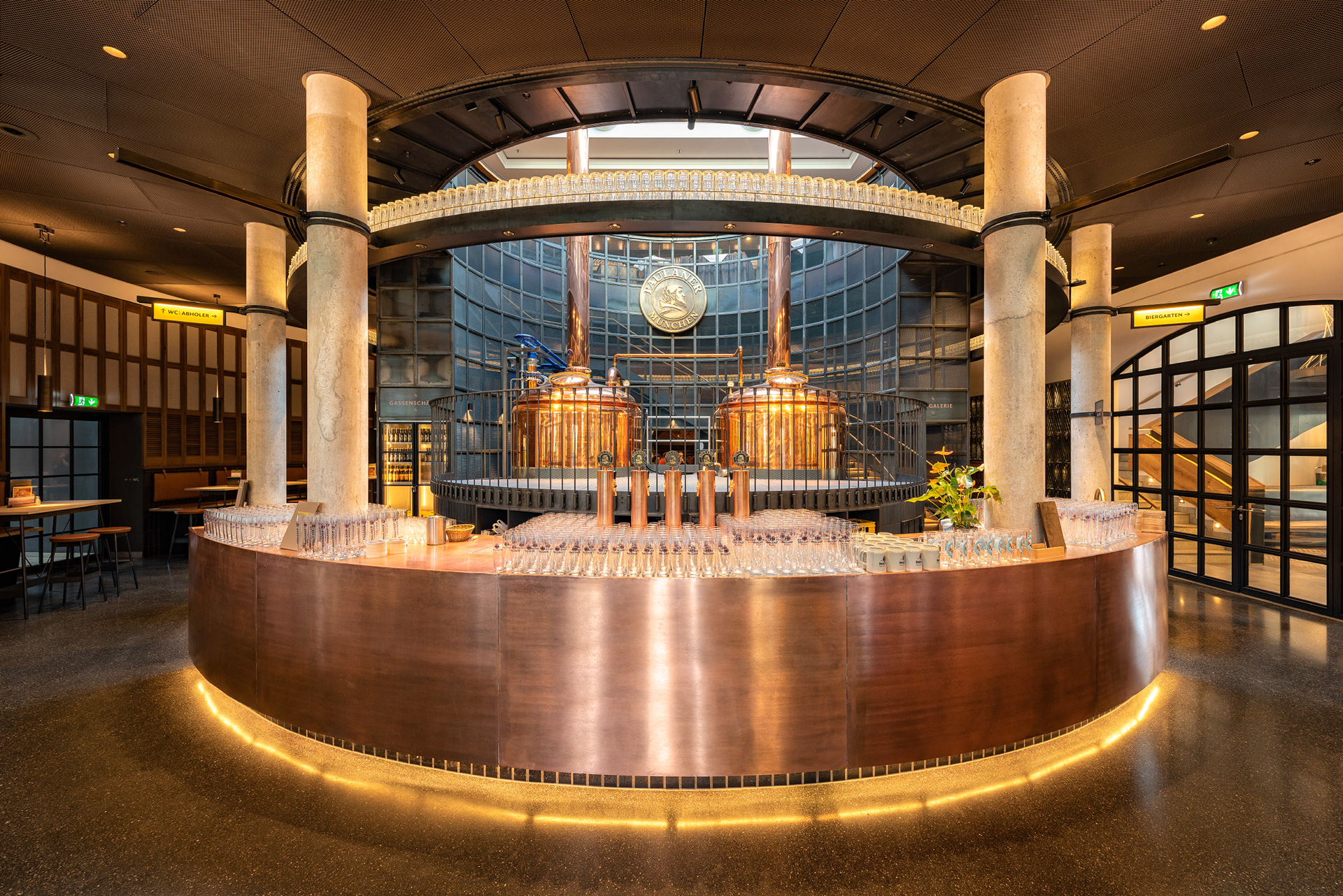 Our first stop in Munich was the Paulaner Nockerberg. A fully functional brewery with a fantastic bar and restaurant that is very much the rose in Paulaner’s crown – a must-visit for any beer fan heading to Munich. Mikki, Paulaner’s sommelier, took us through a tasting of the full Paulaner range, including one or two exclusively available on tap at the Nockerberg. The Unfiltered Kellerbier was a personal favourite. We stopped here for lunch; Helles and Schnitzel all round, German cuisine at its best.

After a quick pit-stop to check in at our hotel, to freshen up and slip on the Lederhosen, we headed to the train station – next stop Theresienweise. This festival has its own train station – yet another reminder that this is a big deal to the Germans. At each stop along the line more and more people wearing authentic Dirndl and Lederhosen boarded the train. Something maybe less obvious to those who’ve never visited, is that this is a family affair. Multi-generational families board the train, Mums, Dads, grandparents, and children of all ages are amongst the now crowded train. The crowd and buzz on the train makes it feel like we’re about to arrive at a big cup final or music festival.

We pull into the station. The tree-lined roads surrounding the festival are closed to manage the ingress of revellers. But, barely 5 minutes after leaving the train, we walk through the gates onto the Theresienweise. This is Oktoberfest. 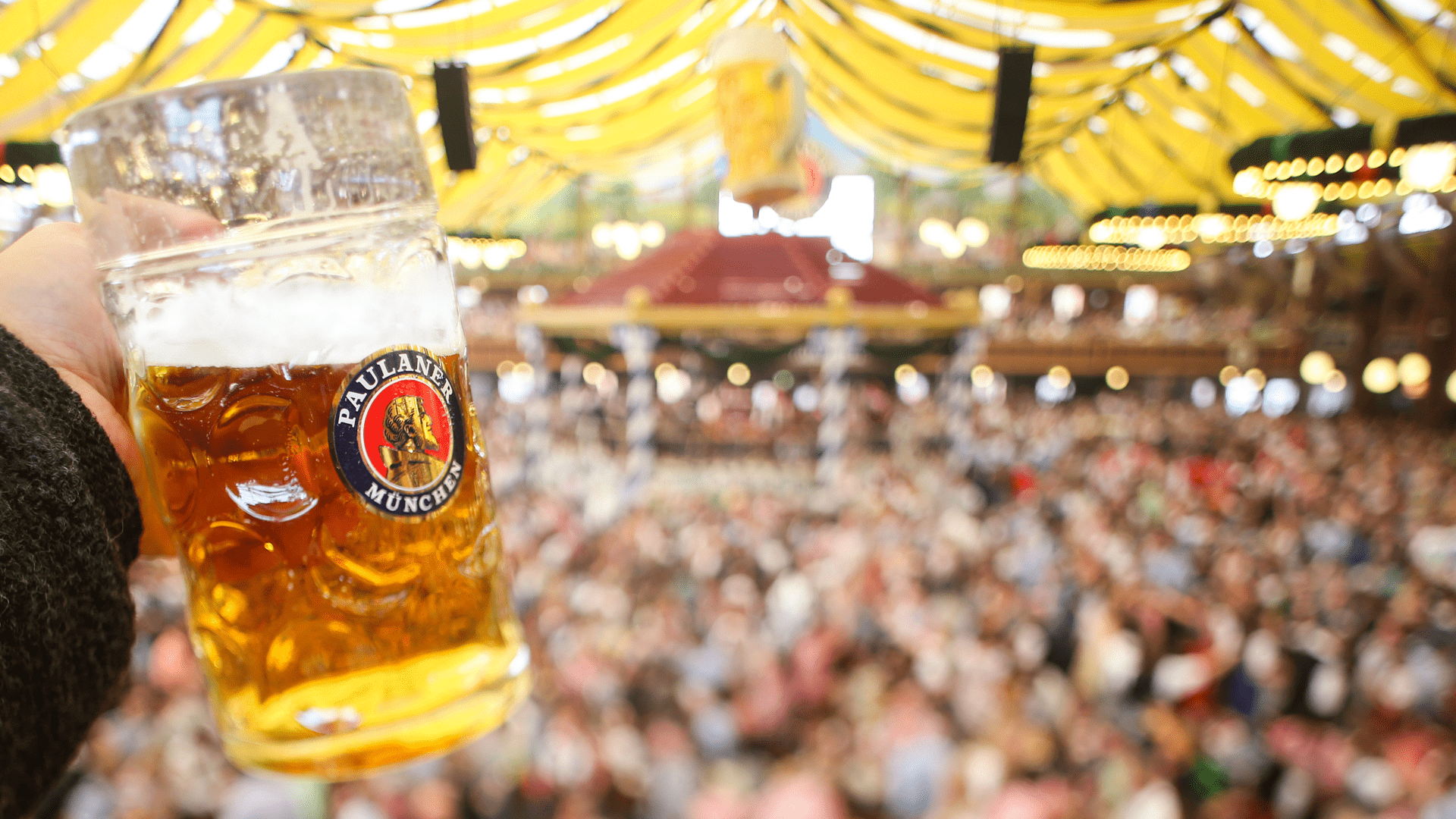 You can spot the first timers in the crowd, awestruck, taking in the sights and sounds, as we catch our first glimpse of the festival. It's simply breathtaking. Despite knowing the numbers in my head, it's still hard to comprehend their scale. The noise of the fairground rides, the food stalls adorned with intricately decorated gingerbread hearts, and the ‘tents’ that are more like small temporary arenas.

We made our way across the Theresienweise past all those famous Oktoberfest tents, Augustiner, Hofbrau, Spaten, and Lowenbrau, then we spot the famous Paulaner tower. We headed to the Hacker-Pschorr tent, newly refurbished for this year. We were shown upstairs (yep, tents have an upstairs at Oktoberfest, crazy!) by our hosts, and after a quick head count, in the blink of an eye, handfuls of steins are slammed onto the tables. The band are in full swing, it’s a mix of traditional German folk interspersed with the occasional crowd-pleaser. Bohemian Rhapsody just hits differently when played on brass to an 8,000-strong beer hall crowd! It was epic, but Ein Prosit is the traditional song, or chant, that really gets the crowd going, over, and over.

For any non-German speakers, this translates to:

The band pipe up with this every twenty or thirty minutes…just to ensure that their guests are staying properly hydrated of course!

After a few steins, we hit the funfair – Oktoberfest is the world's largest travelling carnival don’t forget. Oktoberfest veterans hype up something called ‘Teufelsrad’, or Devil's wheel, a sort of human roulette wheel that has been used at Oktoberfest since at least 1910. It may look easy, but to master, it takes immense levels of coordination and skill! After several failed attempts we call it a night, defeated by the Teufelsrad. 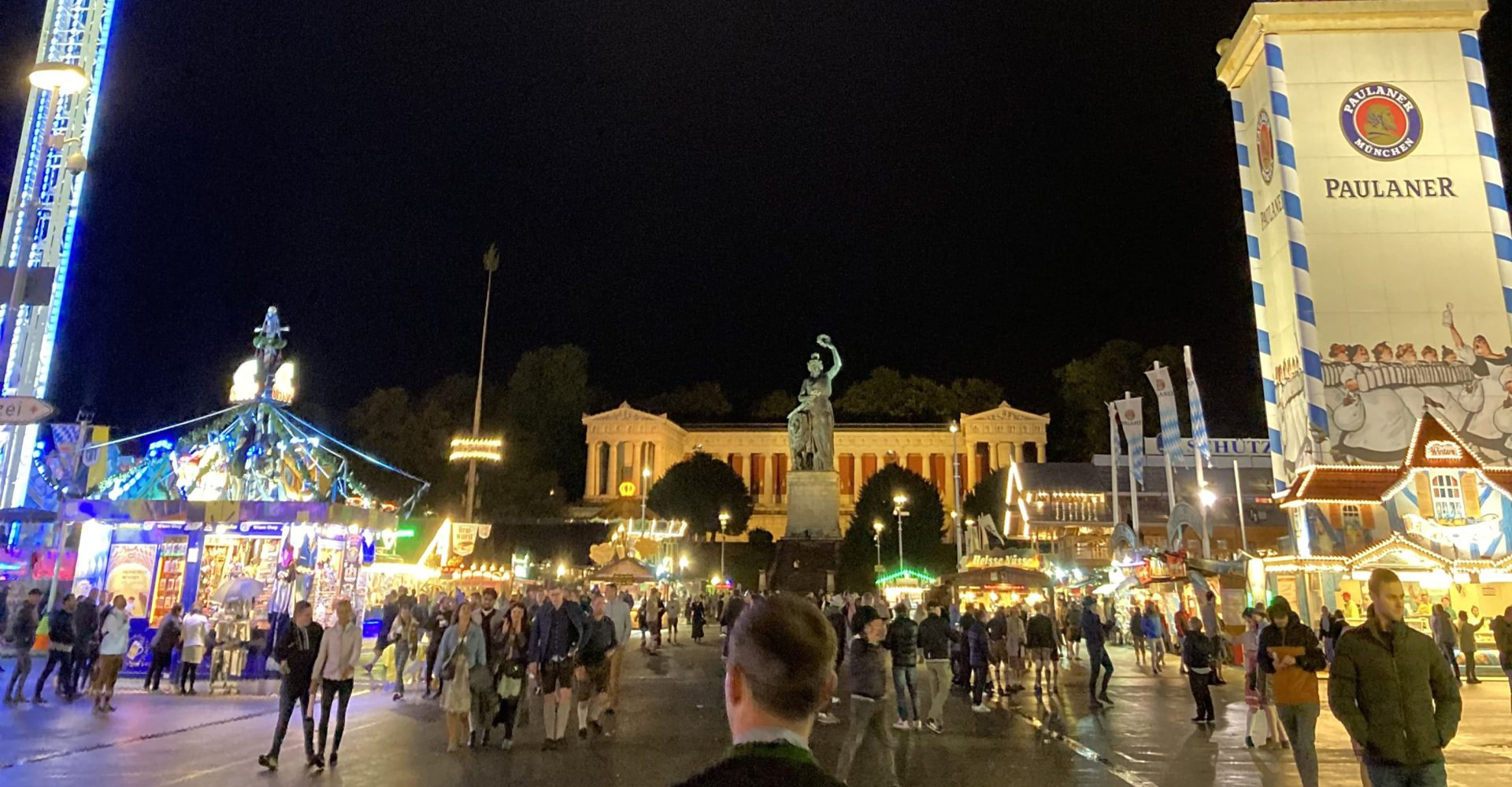 On day two we visited some of Munich’s wonderful beer houses to round off our trip. Der Pschorr and Hofbrauhaus; are both monolithic beer shrines with the capacity to keep the city’s locals and tourists both happy. But it’s the quaint comfort of Tegernseer and Augustiner that give us the real insight into Munich beer culture. Superb Bavarian beers, excellent food, and the service and efficiency that Germany is loved for. It’s a vast contrast to a day on Theresienweise, but a must-do. All of the locals welcome beer tourists with open arms, excited to share their stories, experiences and recommendations with us, and all for the love of a great beer.

I called the trip a pilgrimage, and I believe there’s no better name for it. Whether you’re a die-hard DIPA drinker or an imperial stout supremo, this is the pinnacle of beer. Take the pilgrimage. Experience Oktoberfest in Munich. You won't regret it.