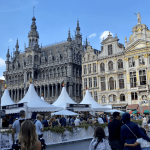 Belgium Beer Weekend is a rite of passage at Cave Direct. An event in the middle of Brussels Grand Place, that celebrates Belgium Beer to the fullest. To say the team at Cave HQ was excited to get back on Belgium soil, see old friends, and sample the country’s finest export would be an understatement. Since our first collection of Riva Pils, back in 1979, Belgium beer has been our passion and the backbone of our business, and after a two-year hiatus, team Cave were heading back over the channel.

This annual trip to Belgium has always followed the same schedule, at least for the past seven years I have been at the company and as the old saying goes: ‘if it ain’t broke’. The visit consists of two action-packed days, starting off in Malle at Huyghe with the celebration of the Brotherhood of Pink Elephant. The Brotherhood of the Pink Elephant really needs to be seen to be believed, but essentially, it’s a celebration of all things Delirium that is reminiscent of The Stone Cutters episode of The Simpson. 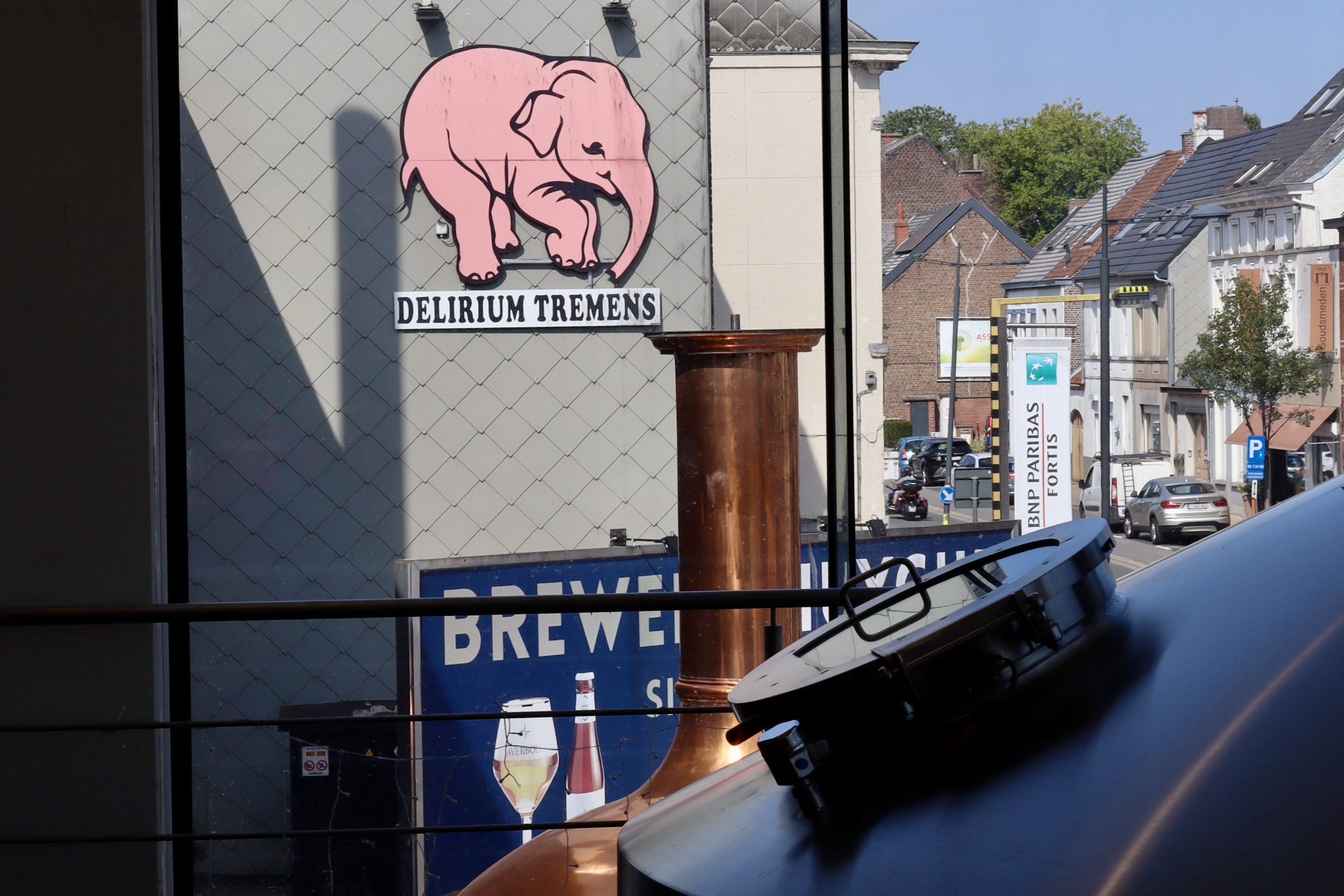 Members of team Cave and several other importers arrive from various locations around the globe at around 11:00 am at the Huyghe brewery. It had been an early start for the London crew who set off at 5:30 am, to catch the euro tunnel over to the continent before embarking on the two-hour drive to the other side. Although we are bleary-eyed, we are greeted by Patrick, the UK export manager at the brewery, who welcomes us with his signature handshake and a huge smile, before handing us all a Delirium Tremens. Some cautious smiles are given from the Cave newbies, it is 10:00 am ‘our time’ after all, but the veterans know the drill and gulp it back without hesitation. Soon after the Northern crew arrive and the whole team has assembled, so it was time for the brewery tour. 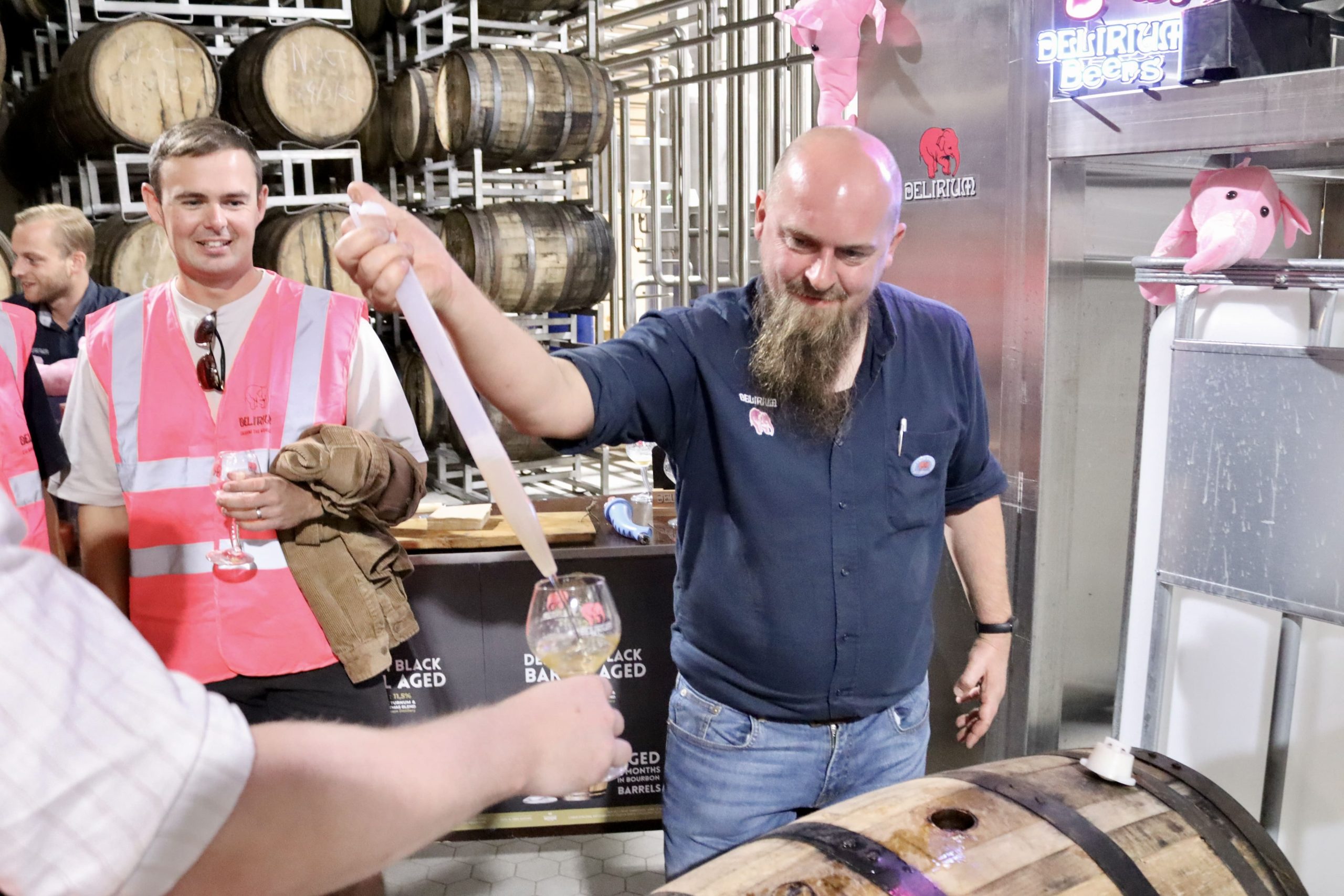 One of the best things about the brewery tour at Huyghe (excluding the amazing robotic kegging arms) is the scale and how every year a new section is added. The breweries ambition to grow is very apparent with each visit, new sections, and the implementation of state of the art technology. At various stages throughout the tour were guided to tasting stations with the brewers who talk us through Averbode and the importance of Abbeye Brewing, Barrel Aged Delirium and the blending process of Nocturnum in Bourbon barrels. Generous samples accompanied each talk too, of course.

With the tour completed and bellies full, it was time for the Brotherhood of the Pink Elephant to commence. Whispers of “did you remember your medallion” could be heard between old staff, as newbies started getting anxious of what they were getting themselves in for. We took our seats in the great hall whilst a file of old timers walked in cloaked in royal blue robes with a bright pink trim and large, blue graduation style caps on. Then, those who have never been inducted and not sporting a large elephant medallion are summoned to the front of the stage, to swear their allegiance to the Brotherhood of the Pink Elephant. Once everyone takes the oath, it is time to down a glass of Delirium in front of a room full of spectators who have before sworn that same oath.

Needless to say, Team Cave did us proud with a photo finish for 1st, 2nd and 3rd all coming from Cave staff. Unfortunately for them, the Brotherhood doesn’t accept VAR and rather than looking at my video recording of who won, the three of them had their glasses re-filled for a second race, with Ben, Beer Merchants Manager, coming out as champion. 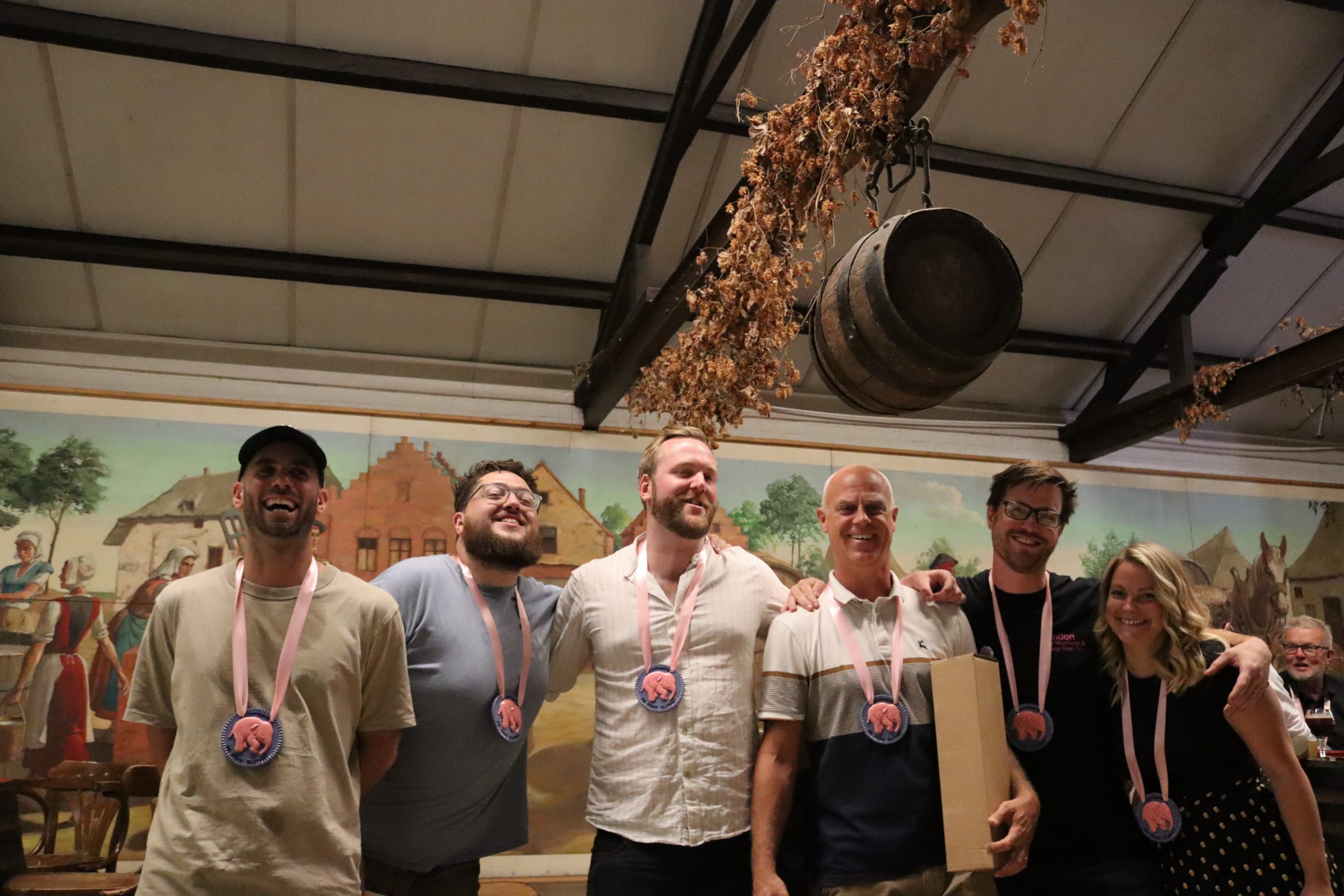 Now the whole team had their medallion, it was time to leave the brewery and head into Ghent to continue the festivities. Ghent is a wonderful city, with cobbled streets, gothic architecture, and a great beer scene. The first and last port of call for us in Ghent is always the Waterhuis, a former brothel and canal side bar with a huge list of Belgian beers. As we filed in, I passed the thick menu of beer on, I didn’t need to look, it’s always going to a one-year-old Orval to kick off proceedings when you’re in the Waterhuis. Orval is a wonderful beer to age as the brett starts to develop as time passes and few settings are as perfect to enjoy this iconic beer. We end up spending most of the night here, standing by the canal and making our way through the menu, before the night draws in. It’s been a long day and we still have the main event in Brussels to look forward to the next day.

The following morning, we set off from Ghent, heading straight for De La Senne in Brussels. We have some time before the event in the Grand Place and we are keen for everyone to see DLS’s new brewery in the North of the City. Yvan and the team at DLS moved the brewery just under two years ago as part of the brewery expansion. The new site in the “up-and-coming” Sint-Jans-Molenbeek region of the city has a huge new taproom and plenty more space for production. It’s always a pleasure seeing the DLS team and hear them talk so passionately about modern Belgian beer and yeast, in particular. Their new space is great and definitely a step up from their previous space. It sounds like it has been a lot of work for Yvan and the staff, getting this new space up and running during a pandemic, but it’s truly brilliant and anything that can produce more Taras is a winner in our book. 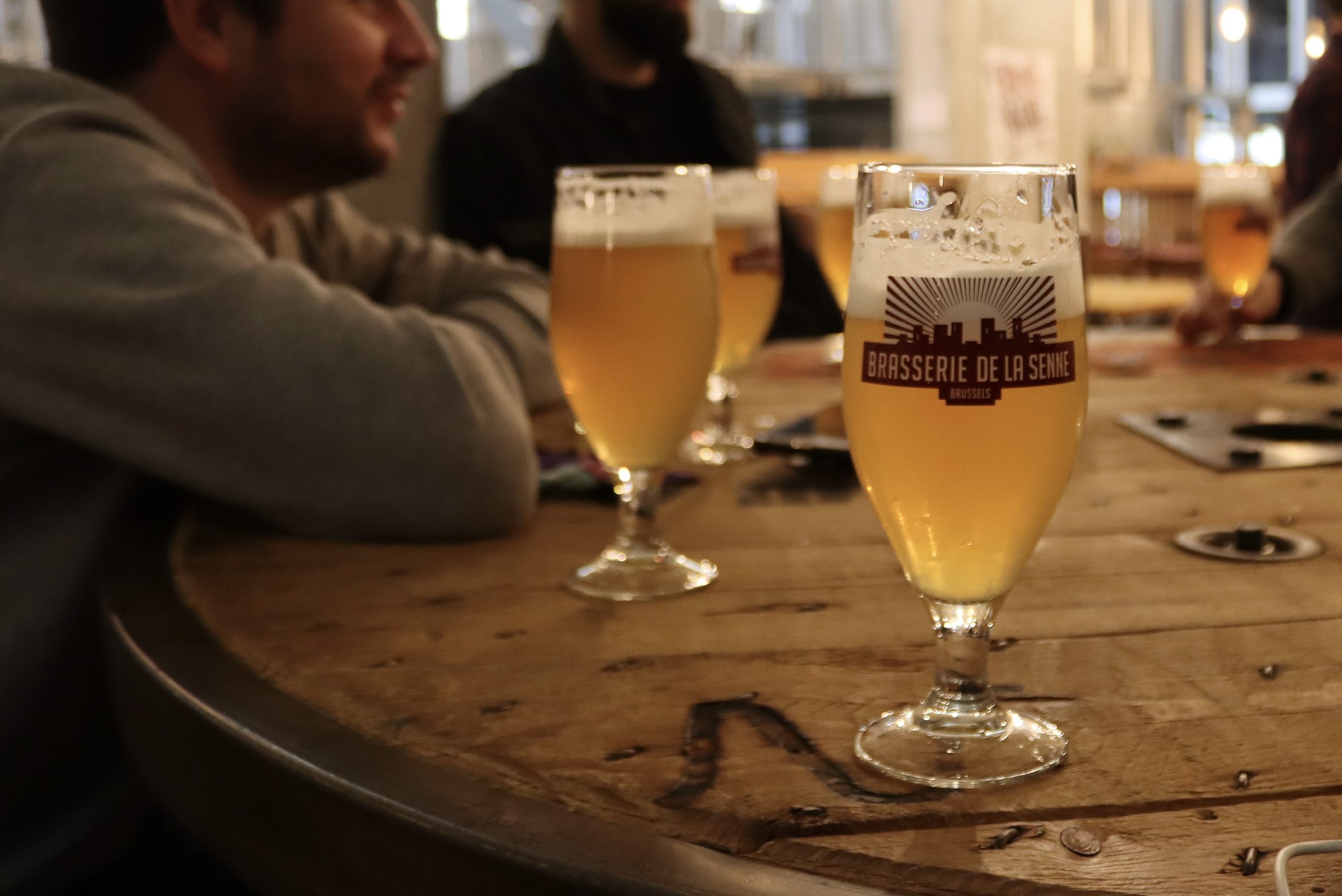 After saying our goodbyes to the team at DLS we check into the hotel and pick up our wristbands for the festival in the Grand Place. We have a few hours to kill before the event kicks off and for the sour-loving members of the team, it means one thing: Cantillon. Cantillon is the holy grail of Lambic producers and the only one within the city of Brussels. It’s always been a little awkward to get to, being in the southwest of the city and not much else being around it.

However, the addition of eclectic scooters in Brussels, means it’s only a fifteen-minute ride across the cobbles. We perched at the bar and indulged in some “drink in only” bottles. I opted for Le Plaisir, a Lambic made using grapes from Cascina Degli Ulivi, a blending of nine different grape pomaces and two-year-old Lambic. Wow. The acidity of white wine grapes and Lambic blended to perfection. Sadly, there was only time to share one bottle, before we had to scoot back to the centre of town and head into The Grand Place for Belgian Beer Weekend. 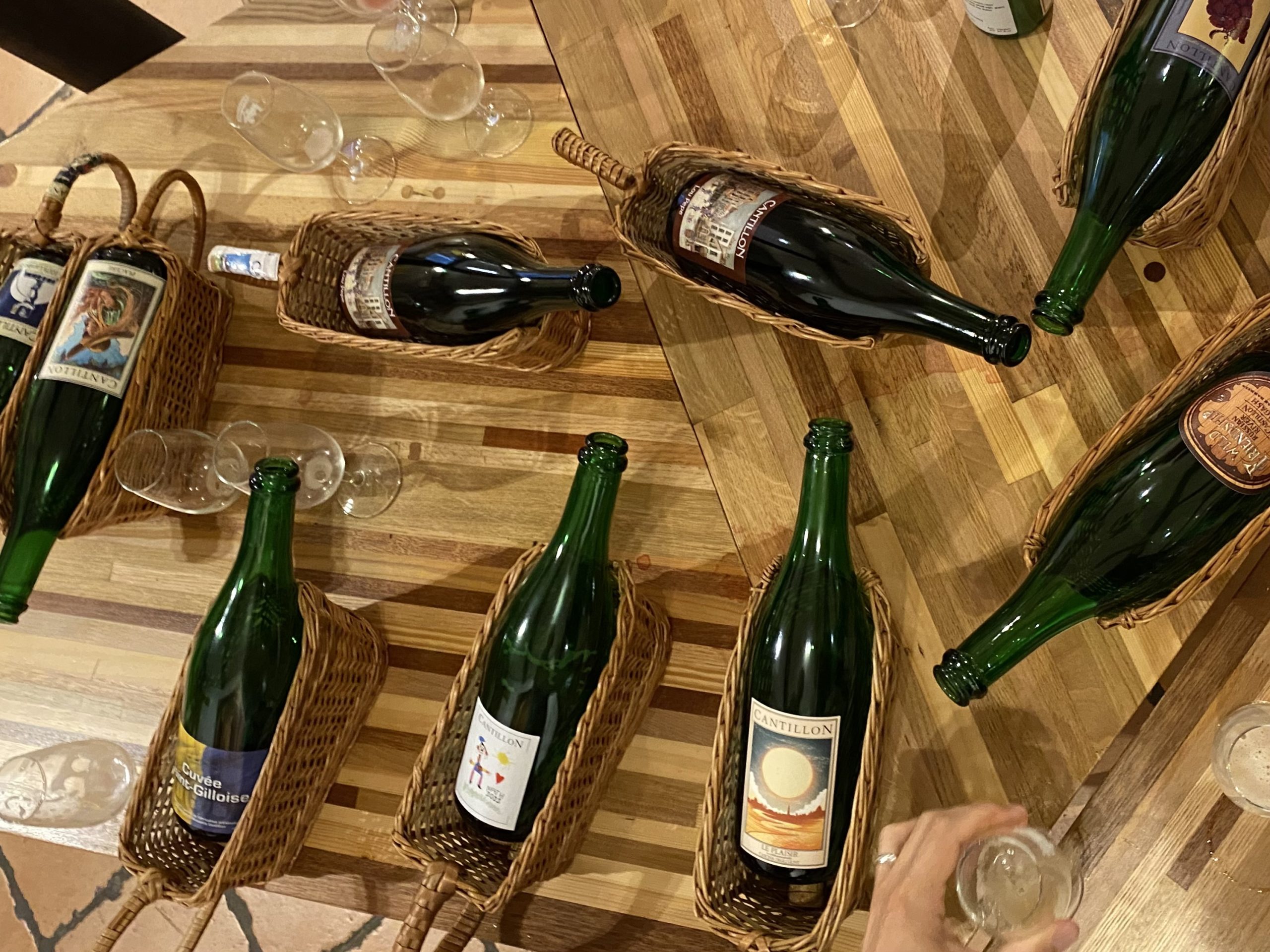 As guests of the breweries, we had the privilege of getting access two hours before the public. The event has over fifty stalls in the middle of the square in Brussels with over five hundred different beers pouring. The location is stunning, with the large, cobbled square overlooked by the gothic cathedrals and state buildings with gold leaf trim. It feels like a who’s who of the Belgium beer scene, many of whom are walking around with large silver medallions on, including our MD Colin (no pink elephants on these ones). These medallions are awarded to people for their services to Belgium beer.

As I walk around with Colin, it feels like every other person is stopping to welcome him back to Belgium. He’s been bringing Belgium Beer over to the UK for over forty years and has known many of the people here since the company began. The smiles, hugs, and obvious questions on “Brexit” continue as we walk around and get handed beers: Lindemans, Zot, Delirium, Boon, Verhaeghe, Musketeers, the list goes on and the handshakes continue. As a rule, I try and keep the ABV as low as possible at Belgium Beer Weekend, it’s a marathon, not a sprint after all and I’ve learnt this lesson the hard way. However, as we walk past the Trappist stand a Rochefort 10 is calling. This is one of Colin’s favourite beers and we can’t resist. After the two-year hiatus, it feels so good to be back and as I sip on the rich, raisiny, warming Quad, all feels right with the world. 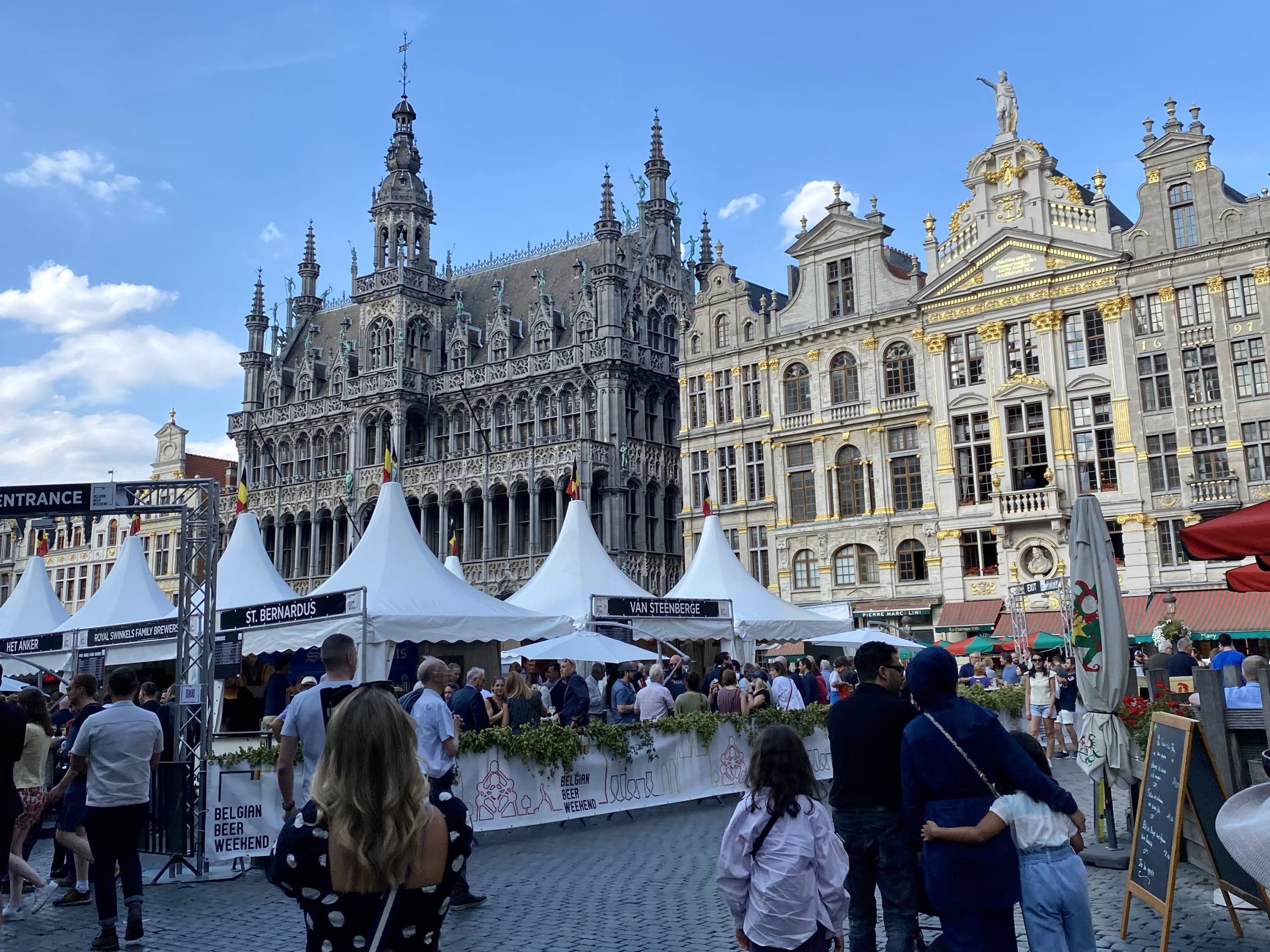 After a few hours, it’s time to head over to The Delirium Café for the traditional Seafood Buffet. I’m not sure if this is a Belgium tradition or just a Huyghe one, but every year they put on a wonderful seafood buffet after the all-day drinking session. It’s not my place to question it though, as I tuck into a Lobster and a pint of Averbode. The evening turns into the night at Delirium Café, which buzzes with locals and tourists alike. Claiming the largest selection of beers in the world the Café is now being referred to as a “Village”, which seems more fitting, with over eight separate bars taking over an entire street.

To finish off proceedings, it seems like a good idea to end the night with a spot of Karaoke, at least, it seemed like a good idea at the time. As bad renditions of Elton John and Dr. Dre echoed through the Brussels night sky, it was time to call it a night. It had been a long, action-packed day and we were all beginning to fade. We were heading back early the next morning, and no one needs a final Delirium.

This has always been a favourite trip for the Cave team and this one didn’t disappoint. The history and culture in Belgium's Beer is unapparelled and drinking these world-class beers in their correct surrounding cannot be beaten. Belgium beer is still at the heart of our business and long may that continue. 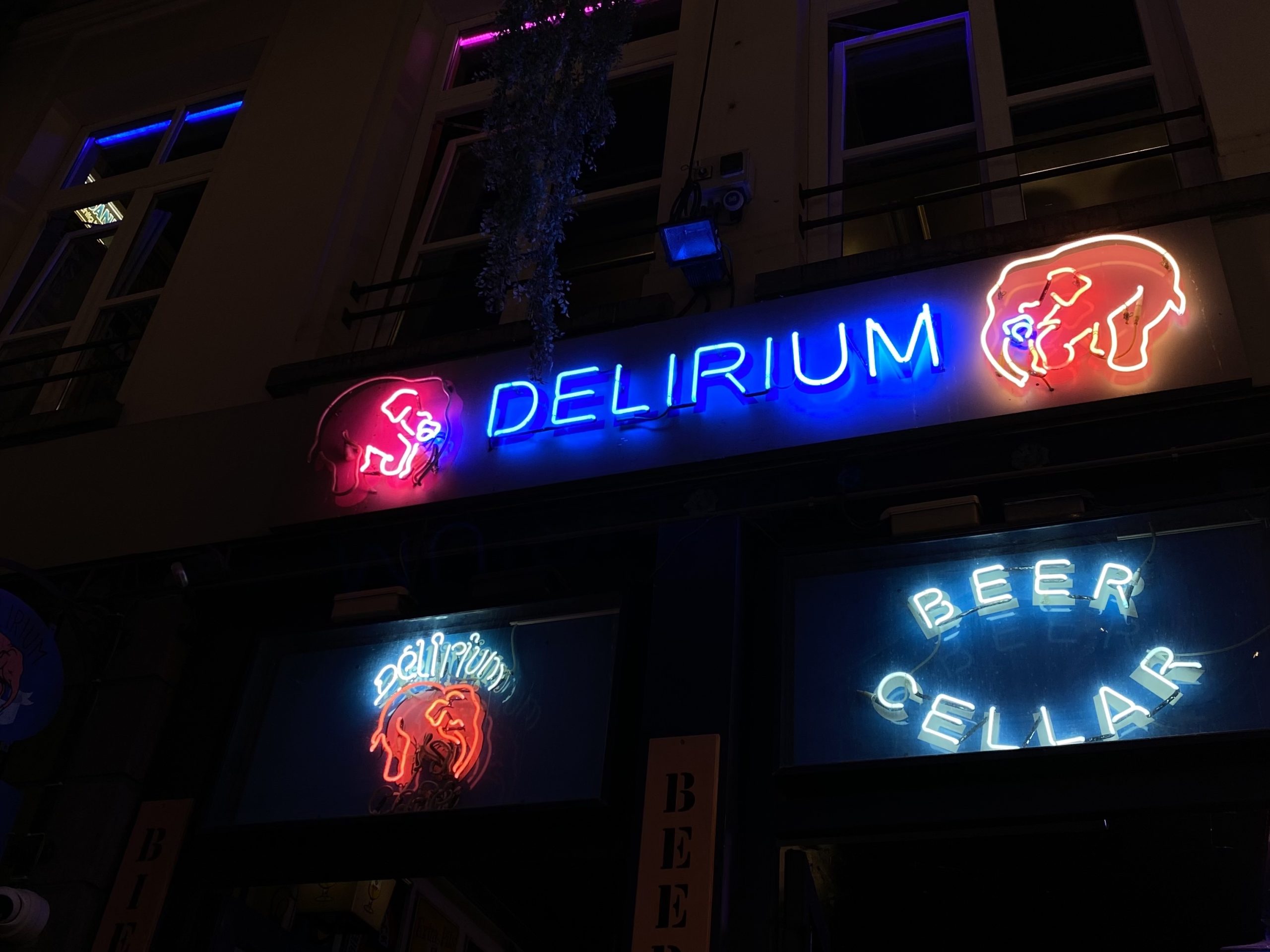