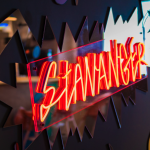 When Lervig approached us about launching their new Pale Ale Loudspeaker in 2021 it was safe to say that everyone at Cave Direct was very excited, especially considering two people from the top three venues (and their relevant account managers) were going to get an all-expenses paid trip to Stavanger courtesy of the brewery. Some of you might remember a similar competition in 2018 for the launch of their wildly popular session IPA  House Party, where the winners won a trip to Scandinavia’s hippest beer festival What’s Brewing and while we didn’t have a festival to attend this time we did have a very eventful few days.

After a few false starts, and a couple of cancelled flights in the planning stages, coupled with the inevitable delays coming out of Manchester Airport, we eventually arrived in Stavanger a few hours later than planned. So far, so standard, for a trip abroad. Thankfully that’s the end of the moaning as once we touched down and arrived in the centre of town, we were collected by Lervig’s export manager (and marathon runner) Chris, who took us to their brewpub, Lervig Local. The bar has a 500-litre kit tucked away at the back which in a couple of days’ time we would brew on. 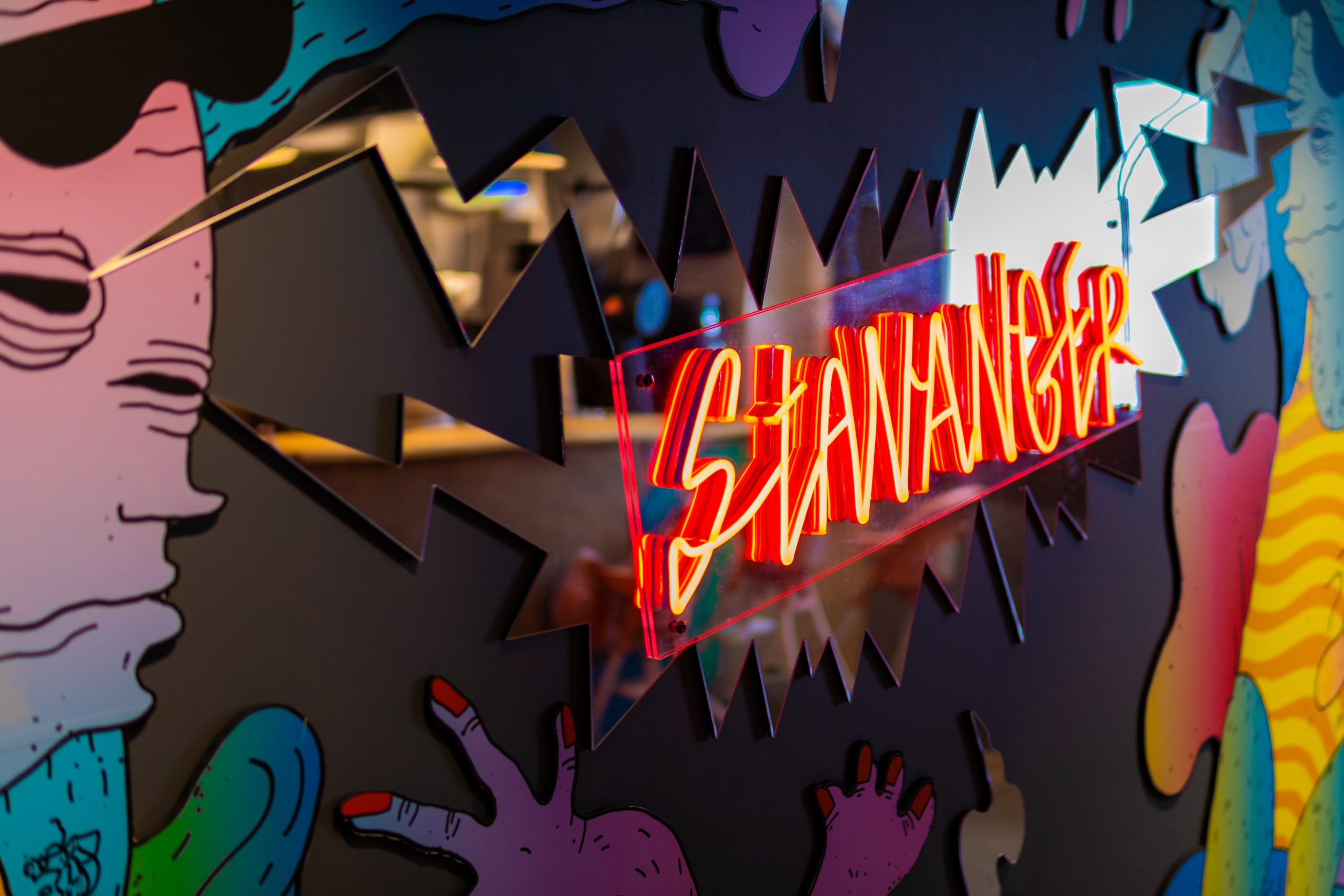 Unfortunately, due to the delayed flight, the northern arm of the trip missed out on the weekly quiz but thankfully they’d kept the kitchen open for us. A round of burgers sorted us out after an unexpectedly long day of travel. As well as the burgers we were also treated to an ample amount of Pilsner and Helles which were greatly appreciated. However, the end of the night took an unexpected turn thanks to what we were reliably informed was a Local tradition, of a shot of the cinnamon whiskey Fireball with a half of pilsner as a chaser, probably unnecessary but maybe was the nightcap we all needed and with that, the first day was over.

Another early start for us on day two – as I seemingly had managed to convince everyone it would be a good idea to hike up the local landmark Preikestolen or Pulpit Rock, likely around the same time we opted for the fireball the previous evening. Even though many of the locals claimed that the weather wasn’t going to be good enough for us to experience the full effect. So, after a coffee and a pastry in the café in the lobby of the apartments (which also just happens to be owned by one of Norway’s top chef Sven Renaa) off to the brewery we went for a morning tour and with our sights set on a hike up the fjords where we would likely see nothing. 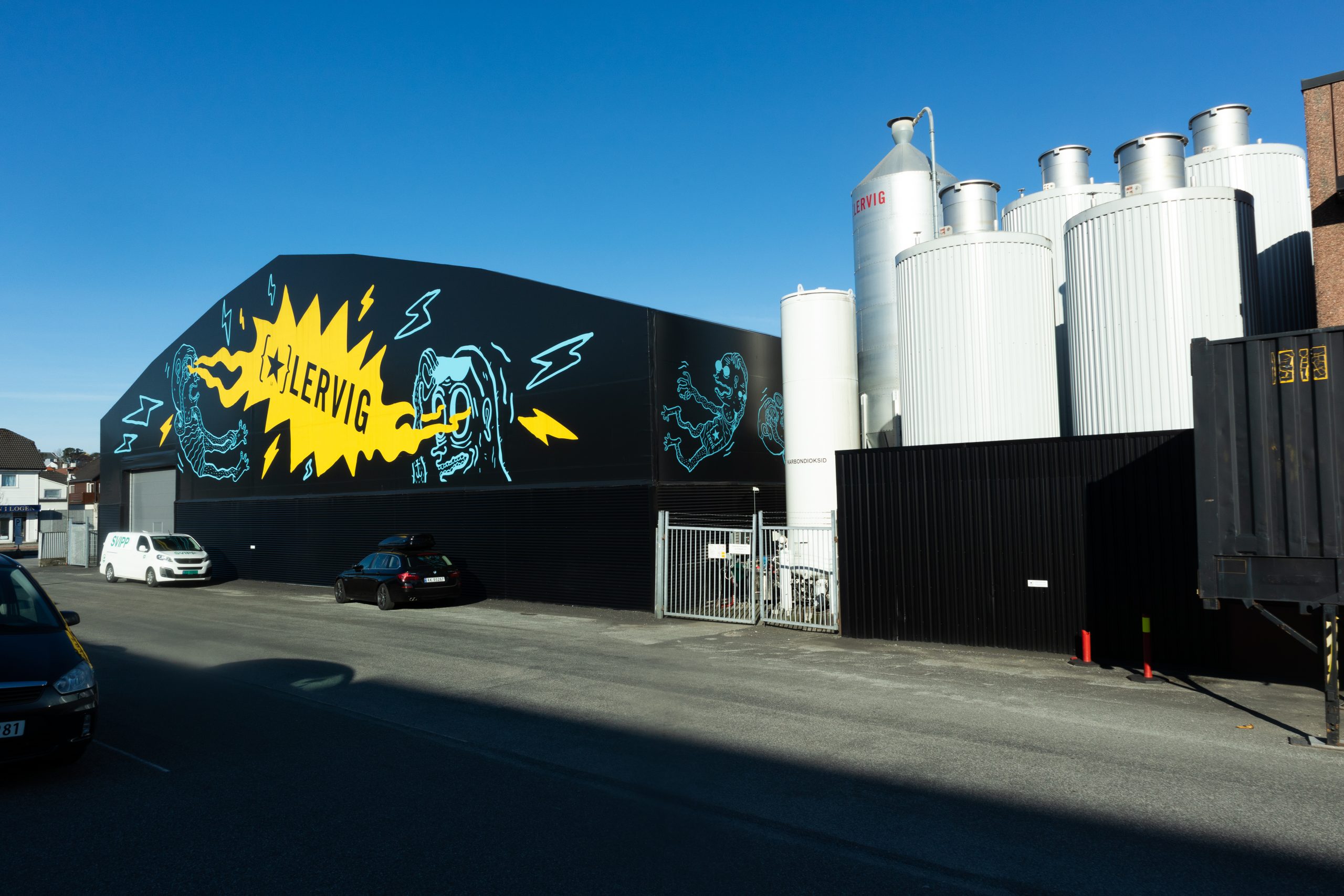 Meeting up with Chris again, we got our chance to see the scale of Norway’s largest independent craft brewery and to say it's impressive is doing it a bit of a disservice! After we saw the major production side of things, we also got to nosy around The Rackhouse Project, a recent addition to the brewery, where their focus is on how ageing beer in wood directly affects the taste of the beers. It was while we were on this part of the tour that Dave the Production Manager let us try some of the All I Want for Christmas, a BA Eggnog Stout, straight out of the barrel which lead to the revelation that none of us actually knew what Eggnog actually was; as in can you Nog something without Egg? Answers on the back of a postcard, please. 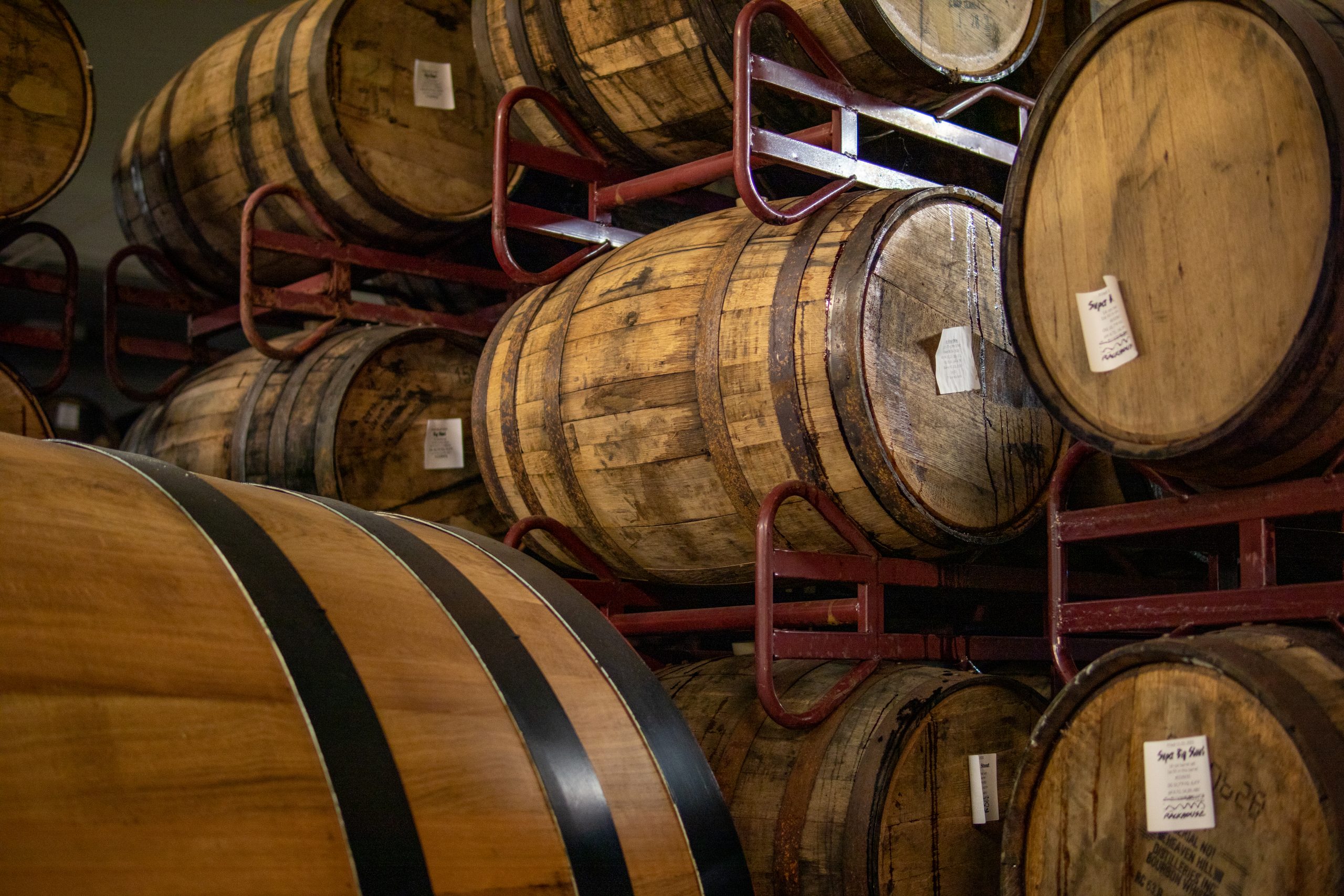 After bothering the higher-ups (thank you Anders!) at the brewery we were very fortunate to be allowed to borrow two branded cars to head out to Pulpit Rock. Travelling to Pulpit Rock is a lot easier than it used to be from central Stavanger and we got to experience the new 14.4km-long subsea Ryfylke Tunnel which made what could have been quite a tricky journey out there as simple as possible, the trippy light show in the tunnel probably helped the time fly too. Once we arrived at base camp the sheer scale of the walk ahead sunk in and almost as if by magic it started to rain heavily. All that being said, the weather wasn’t any worse than it was in the UK in October so off on our trek we went, and honestly what a wonderful hike it is! Don’t get me wrong there are a lot of steps (equivalent to 300 flights according to my watch) but the views as you’re going up are amazing. We couldn’t believe it when we reached Pulpit Rock and it was clear. It is a genuinely breath-taking experience and having a can of No Worries while at the top was probably the icing on the cake after a much quicker descent than ascent, we headed back to Stavanger in time for tea. 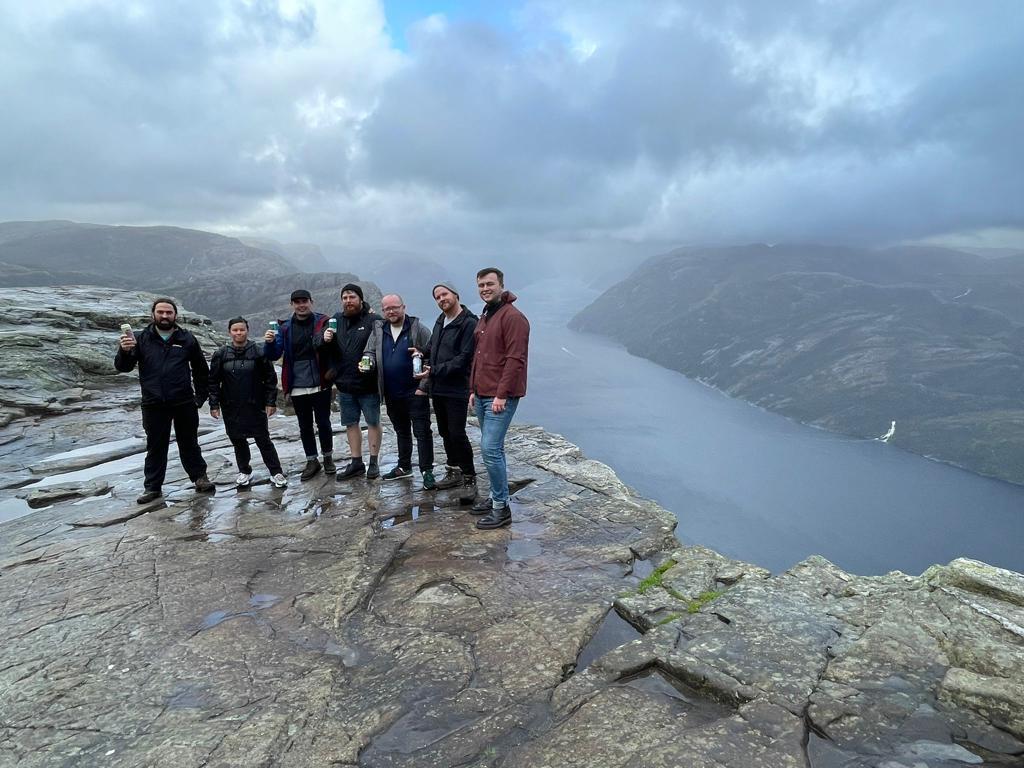 In the evening we walked over to Øst, a bar which is part-owned by Lervig Brewmaster Mike Murphy, for drinks and grabbed some food from a local pan-Asian place which Liam the manager (an old friend of Cave Direct and Lervig) kindly let us eat on their premises. After that, we headed down to the Cardinal pub which turns out to be the most English pub we could find and after a game of darts and some drinks it was time for bed after trying and failing to find a snack on the way home it was time for a well-earned rest.

On our final morning, we had a brew day scheduled at the Lervig Local brewpub. There were several ideas banded about for the style of beer to be brewed. I suggested we re-brew Café Sur, an old Lervig limited-release Berliner Weisse with freshly brewed coffee but with a lack of coffee available this was parked… for another time maybe?

Two of our competition winners from sister pubs Arcade Beer & Parish (Huddersfield) jumped in and requested we help with their birthday celebrations by creating a 6% IPA with Azacca and Mosaic hops. This idea won over Tomek, our brewer for the day and we set to it. 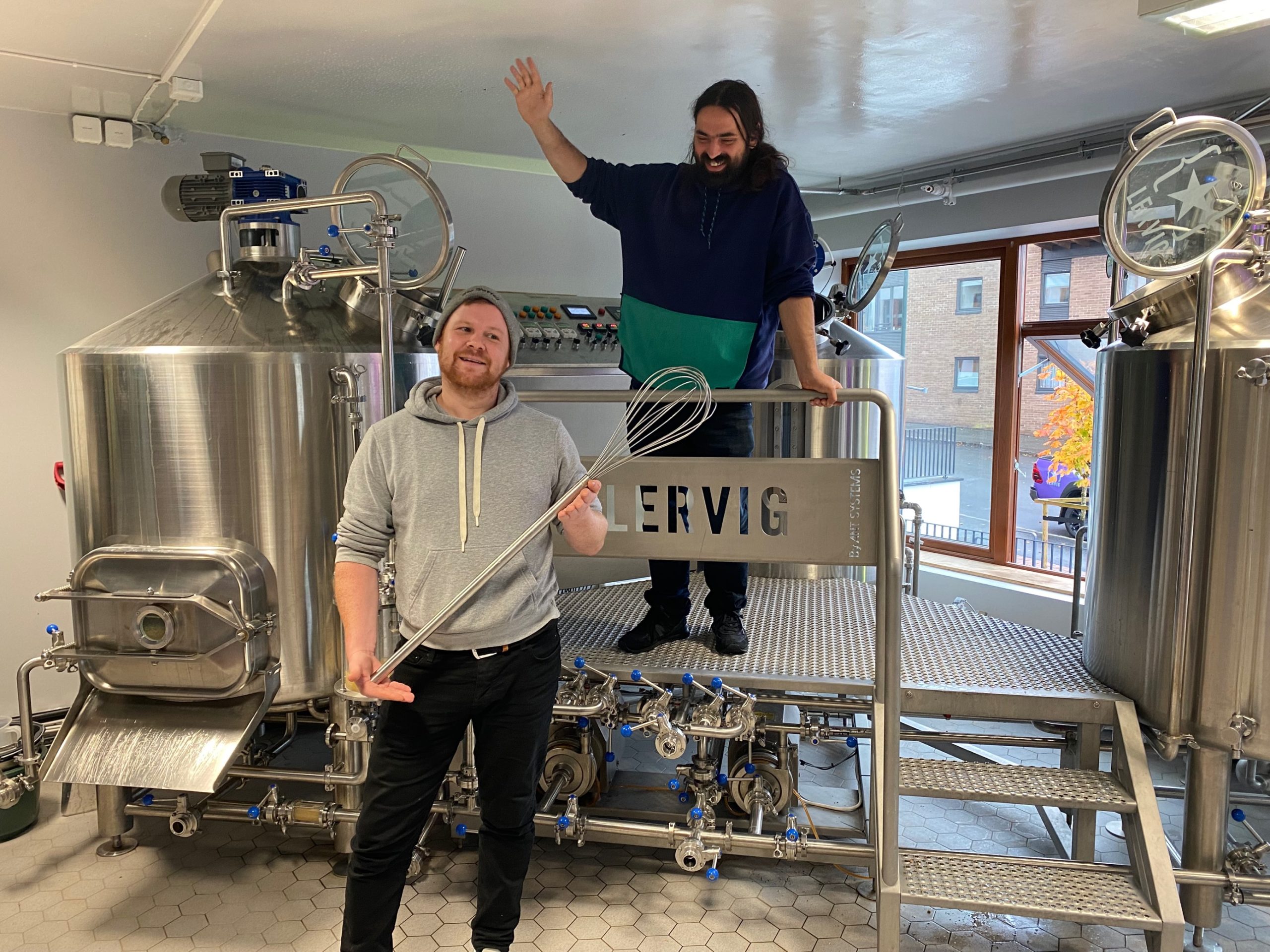 The beer has a classic in-joke title, “Why don’t they put more wheels on an aeroplane?” a musing of Kirby from Parish as he stared uneasily out of the delayed plane’s window. We are hoping for about ten 20L kegs which will be shipped over with our next delivery and will be served exclusively at all three winning venues – The Great Northern Railway Tavern (Hornsey), The Store Group (Manchester) & Arcade Beers (Huddersfield).

What an ending to an amazing trip. A huge thank you to Lervig for hosting and taking such great care of us. Here’s to many more!